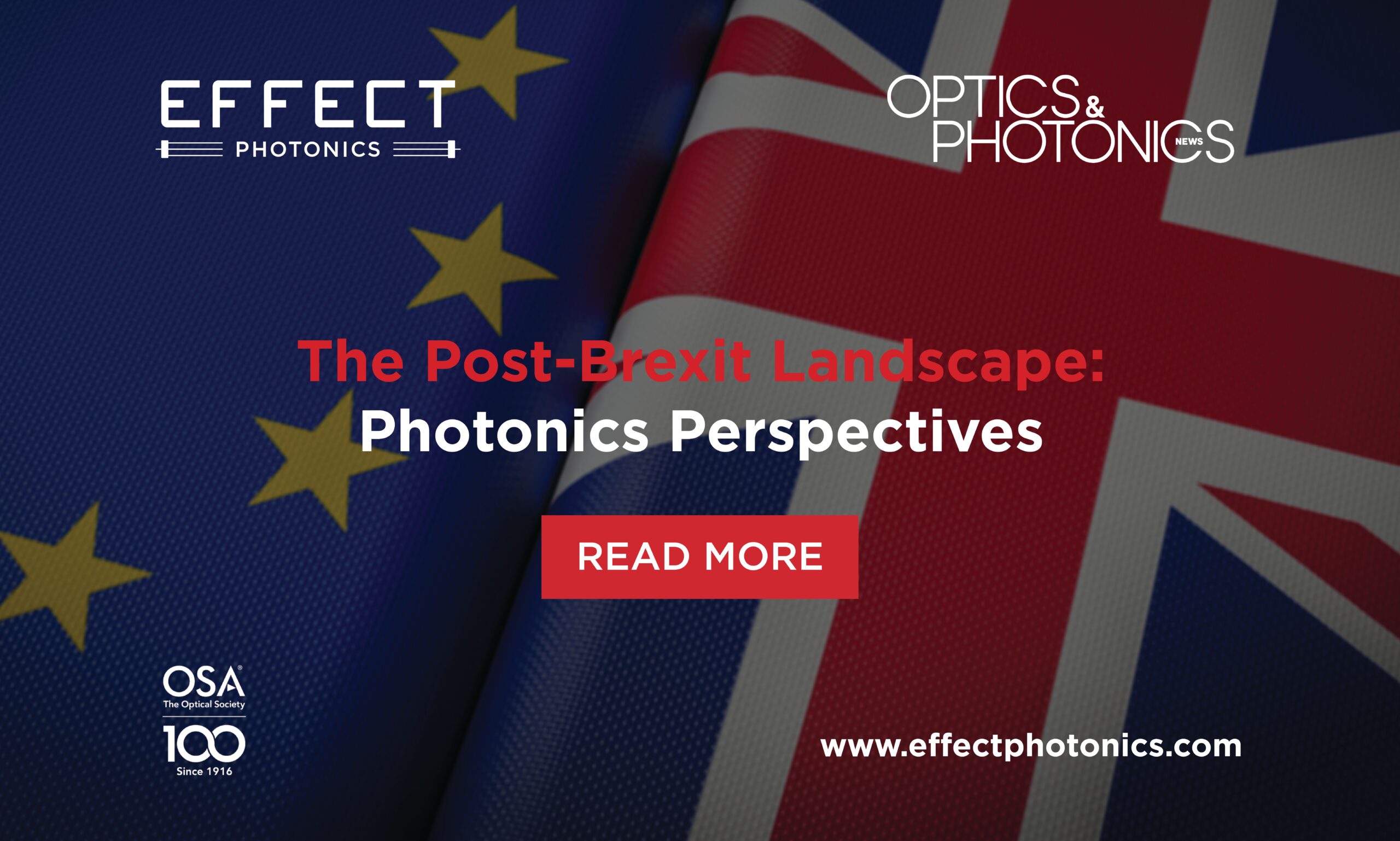 Eindhoven – March 31, 2021 – EFFECT Photonics’s CEO, James Regan, was delighted to speak to Optics and Photonics News Magazine on an article about: The Post-Brexit Landscape: Photonics Perspectives.

On 24 December 2020, almost literally at the last minute, and more than four years after the United Kingdom voted to leave the European Union, the U.K. and the EU finally sealed a trade and cooperation agreement to govern their post-Brexit relationship. The agreement’s stakes were high; in 2019, some 43% of Britain’s exports of goods and services went to the EU.

For a while, the final months of negotiation on a new framework to govern that big chunk of trade seemed impossibly snagged on arcane details of fishing rights in U.K. waters and state aid to industries. In the end, though, the December accord—which guarantees tariff-free trade in most goods between the U.K. and the EU—led to deep breaths and a sense of relief on both sides of the Channel.

The immediate aftermath of the agreement, which came into force 1 January 2021, included some well-reported delays and snarl-ups for imports and exports of trade goods, as businesses attempted to grapple with a suddenly “hard” U.K.–EU border and new paperwork requirements. But now, three months in, much of that dust has settled. To get some insight on the accord’s impact for photonics—and, particularly, on the U.K.’s future participation in the new framework program for EU research funding, Horizon Europe—OPN recently talked with several members of the European photonics community.

Politics and reality
Notwithstanding the eleventh-hour post-Brexit agreement in December 2020, one could be forgiven for thinking that relations between the U.K. and the EU have reached something of a low point in the past several months. Tensions have especially flared over the availability of COVID-19 vaccines, and over the complex post-Brexit status of Northern Ireland. There was even an announcement, in February, that a Cold War-style “emergency hotline” would be set up between Brussels and London to handle post-Brexit tensions.

Yet in the wake of the December agreement, these political twists and turns might prove relatively unimportant to the real-world photonics business.

James Regan, EFFECT Photonics CEO explains: “I think it’s important to pick apart government posturing from teams of people actually working on the ground,” says James Regan, the CEO of the Eindhoven, Netherlands–based company EFFECT Photonics, which develops and manufactures on-chip modules for the communications market. “Our governments do what our governments do, but where there are long-standing relationships, those are largely not affected by that … Business is done between people, not between governments.”

A sense of relief
Regan is particularly well positioned to see both sides of the post-Brexit agreement. While headquartered in Eindhoven, EFFECT Photonics also operates a development lab and manufacturing facility in Brixham, Devon, U.K. (The company has a unit in Taiwan as well, and Regan expects that it will branch into other world regions in the future.) From that broad perspective, he says that one of the biggest benefits of the deal is simply putting an end to more than four years of uncertainty since the 2016 Brexit vote.

“It was very frustrating,” Regan observes. “Like all of business, what we wanted was to have clarity … Nobody likes the inability to plan.” Another frustration, he adds, was that “people will often tend to assume the worst-case scenarios,” an orientation that Regan believes can distract from important issues. “At least now we have clarity,” he says. “We understand what the situation is, and we go forward and build around the landscape that we find.”

EFFECT Photonics delivers highly integrated optical communications products based on its Dense Wavelength Division Multiplexing (DWDM) optical System-on-Chip technology. The key enabling technology for DWDM systems is full monolithic integration of all photonic components within a single chip and being able to produce these in volume with high yield at low cost. With this capability, EFFECT Photonics is addressing the need for low cost DWDM solutions driven by the soaring demand for high bandwidth connections between datacenters and back from mobile cell towers. Headquartered in Eindhoven, The Netherlands, with additional R&D and manufacturing in South West UK, with sales partners worldwide. www.effectphotonics.com

For more on our technology, visit: https://effectphotonics.com/technology/