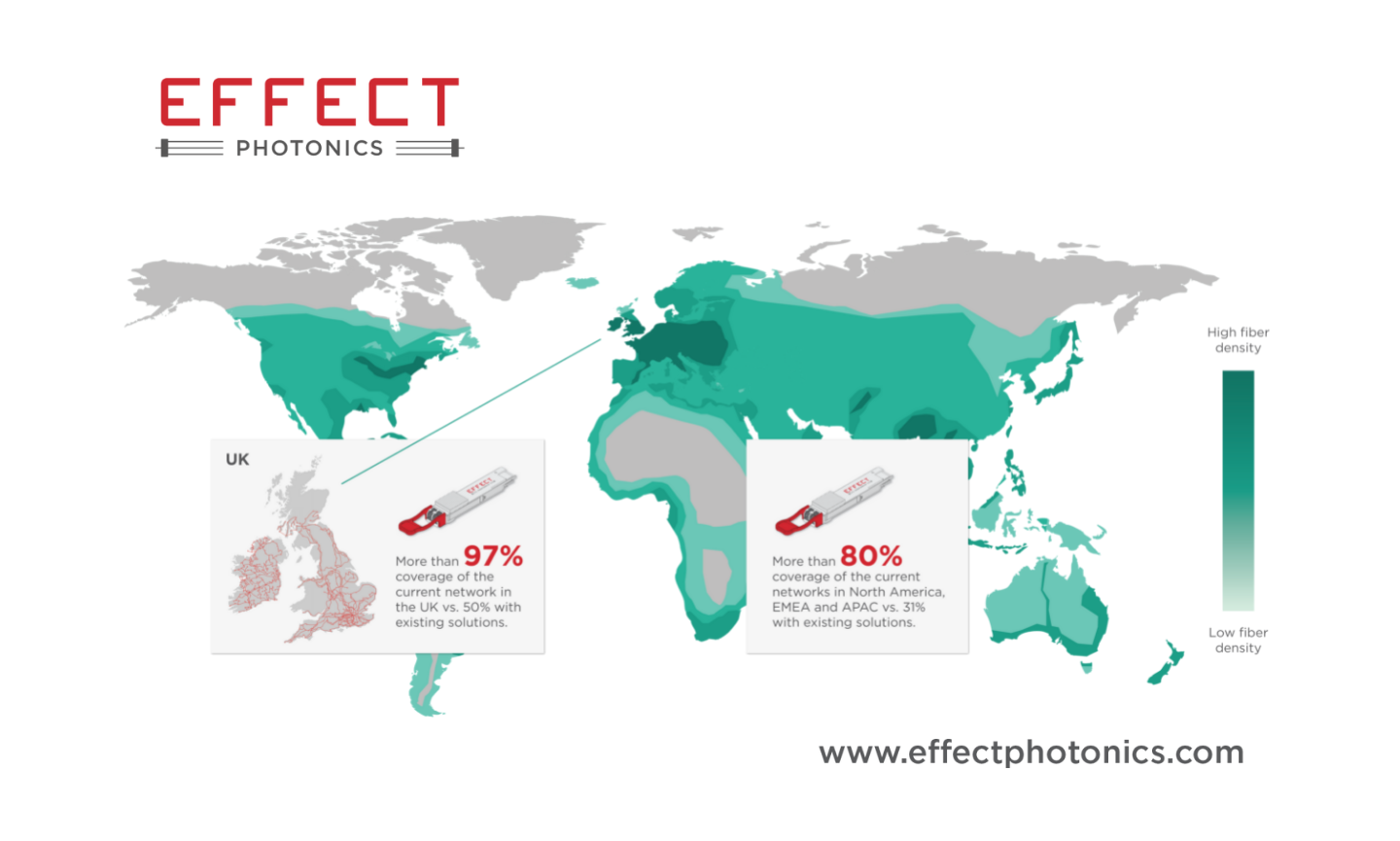 In the coming decade, the network providers and countries with the most extensive installed base of optical fiber with the highest capacity will dominate the access network domain. This scale-up process will allow optical networks to handle the ongoing exponential increase in the global demand for data.

To cope with this need, providers have long dreamed of implementing the concept of IP over DWDM (IPoDWDM), in which DWDM optics are integrated into the router. However, widely deploying IPoDWDM with coherent optics forced operators to face two key obstacles: the router faceplate trade-off and the performance trade-off.

Significant advances in electronic and photonic integration overcame the faceplate trade-off, miniaturizing coherent line card transponders into pluggable modules the size of a large USB stick. However, even if DWDM optics could finally match the required router faceplate density, they sacrificed launch power and reach.

This trade-off between size and performance has forced carriers into a dilemma when deploying new network upgrades. Pluggable transceivers enable more affordable upgrades, but their limited reach means they cannot cover the entire transport network. Meanwhile, coherent line cards provide enough performance to cover all the network links, but they are big and expensive, so carriers must try to push their vendors for lower prices.

Moving IP over DWDM from Datacom to Telecom

The viability of IP over DWDM (IPoDWDM) solutions was a major factor in the rise of coherent pluggables for datacenter interconnects. By integrating DWDM pluggable optics into the router, IPoDWDM eliminates the optical transponder shelf as well as the optics between the routers and DWDM systems, reducing the network capital expenditure (CAPEX).

Advances in electronic and photonic integration overcame the faceplate trade-off. They allowed the Optical Internetworking Forum (OIF) to create the  400ZR standard for 400G DWDM pluggable modules with QSFP-DD and OSFP form factors. With small enough modules to pack a router faceplate densely, the datacom sector could profit from an ideal solution for high-capacity data center interconnects of up to 80km.

Telecom operators want to implement a similar IPoDWDM solution, but 400ZR standards did not have the reach for the longer links of telecom transport networks, which span several hundreds of kilometers. Extended reach 400ZR+ standards have been developed to handle these longer links, but in multi-span transport networks with ROADMs, their reach is limited to roughly 250km. Since only half of the links in a carrier’s network are less than 250km long, 400ZR+ pluggables cannot cover most of a carrier’s transport network without needing some external, additional amplifier. Since mixing pluggable and line card technologies would lead to complications in network routing and management, several carriers have chosen to prioritize network coverage and stick to the old line card transponder.

The reach trade-off happens because the QSFP-DD form factors could not fit optical amplifier components, limiting the transmit power and reach of the transceiver. Furthermore, lasers in most QSFP modules are still discrete: manufactured on a separate chip and then packaged with the photonic integrated circuit (PIC). A discrete laser carries a power penalty because of the losses incurred when connecting it to the PIC. On the other hand, big transponders could easily fit amplifiers to deliver best-in-class performance, reaching 1500km link lengths that could cover all the different link lengths in the carrier network.

Fortunately for the industry, further improvements in integration are overcoming the reach trade-off. For example, by integrating all photonic functions on a single chip, including lasers and optical amplifiers, EFFECT Photonics’ optical System-On-Chip (SoC) technology can achieve transmit power levels similar to those of transponders while keeping the smaller QSFP-DD form factor, power consumption, and cost.

An optical SoC approach increases the transmitter’s launch power by including semiconductor optical amplifiers (SOAs) on the chip and minimizing the optical losses by placing the laser and SOAs elements on the same chip as the rest of the components. Line card transponders are still the best bet for the most extended links (ultra-long-haul, submarine) and for implementing non-standard constellation schemes. However, for many other use cases, pluggable modules can finally match the performance of line card transponders.

One plug to rule all network links

On-chip amplification also adds versatility to QSFP modules because of the SOAs tunability. By tuning the SOAs upwards, the QSFP transceiver can operate in a high-performance mode, with high-transmit power and high receiver sensitivity. With the right forward error correction (FEC), this high-performance SoC module can handle borderline long-haul links (about 1000km). On the other hand, tuning the SOAs down would enable an energy-efficient mode that could serve more lenient, shorter-reach use cases (links < 250km).

To show how this versatility becomes useful, let’s look at a real-life example. British Telecom studied the links in their UK network that they would upgrade to 400G. They wanted to interconnect 106 sites (including ten hub sites) with links that contained ROADMs and typical G.652 fiber. BT found that open ZR+ transceivers could only cover 50% of the brownfield links containing ROADMs (links lengths less than 250km), while X-ponder line cards can cover all brownfield links.

A QSFP with an optical SoC that includes lasers and SOAs could deliver enough power and reach for 1000 km links, covering 97% of the links in BT’s network. Meanwhile, worldwide studies have looked at brownfield links deployed in America, Europe, and Asia and estimate that 80% of these links are less than 1000 km. The proposed module could also cover these links.

Telecom carriers need to scale up their transport networks affordably, and solutions such as IPoDWDM can help achieve this goal. Coherent pluggable modules with a fully integrated optical System-on-Chip (SoC) can help overcome the performance trade-offs that prevented the broader deployment of IPoDWDM solutions in carrier transport networks.

SoC devices maximize the bandwidth density of optical transceivers, enabling transponder line card performance in a pluggable form factor. Thanks to their on-chip tunable amplifiers, the modules with an optical SoC can operate in high and low power modes that cover almost every link in an operator’s network. This way, a single versatile pluggable can take care of a carrier’s future network upgrades.